Orthodox Infertility II
Following up on this post, R. Chaim Jachter has an Op-Ed in this week's The Jewish Press on this topic, based on his chapter in Gray Matter volume 2 (link):

A proposal for changing the laws of taharat hamishpachah (family purity) was recently raised in the Israeli newspaper HaTzofeh, based on the observation that adherence to these laws may be responsible for many couples experiencing difficulty conceiving. Healthcare professionals have named this phenomenon “Orthodox Infertility.”

For some women, the time they wait before immersing in a mikvah each month likely prevents them from being able to conceive. It is halacha that is causing this infertility and, absent these laws, the couple would be able to have a child. Understandably, this problem can cause significant anguish to those who suffer from it – anguish that may make us wish we could alter the rules and allow these suffering souls, for whom we must have much sympathy, to conceive children.

This, however, is not possible...

Kosher Mikvah
If you want to understand the details and different opinions on how a mikvah should be built, R. Chaim Jachter's Gray Matter volume 2 has five chapters in plain English on the subject. I believe that, in this aspect, it is unique in the English language.

Orthodox Infertility
A few weeks ago, HaTzofeh published an interview with gynecologist Dr. Daniel Rosenak in which he called for a major change in the practice of the laws of niddah. He raised the possibility of no longer considering a niddah to a be possible zavah, which requires seven "clean" days after five days rather than just seven days (link). This would allow women who ovulate before they go to the mikveh to have children naturally. The article is full of objectionable ideas and misinterpreted concepts, but that is beside the point. The following week, the newspaper published a response by R. Benny and Noa Lau in which they object to the proposal on both halakhic and medical grounds (link). And subsequent to that, the paper also published an article by R. Yoel Katan objecting to the suggestion (link) and then earlier this week Haaretz reported on this debate (link).

R. Chaim Jachter, in his Gray Matter volume 2, has an entire chapter on the subject. He notes that, "Rav Yosef Dov Soloveitchik (as reported by Rav Aharon Lichtenstein and Rav Rosef Adler), Rav Ovadia Yosef (Taharat Habayit 1:1:6), and Rav Shlomo Zalman Auerbach (Teshuvot Minchat Shlomo 2:70:1:3) all cite the Ramban's aforementioned comments as proof that we may never waive the requirement for seven clean days, even when it interferes with conception" (p. 98). R. Jachter then lists a number of other halakhic and medical options that can solve many of the "Orthodox Infertility" problems.

What I don't get with the proposal is that if there are some women who are suffering from infertility because of the long time before going to the mikveh then -- at most -- rule permissively for them (not that I am advocating such a ruling). But why propose abolishing the practice for everybody? Don't get me wrong. I'm a red-blooded male and would like to shorten the time just as much as any other guy. But that's not quite the instinct we want to utilize when making halakhic decisions.

As a sidenote, those who claim that halakhah is determined by a male power structure will have a hard time explaining why this rule, which essentially cuts in half the time available each month for marital relations, is not done away with by male fiat. One would think that if this dubious theory were correct, the male will would find an halakhic way.

Remembering the YU of Yore 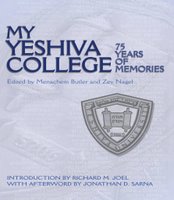 A review of My Yeshiva Collge: 75 Years of Memories in The Forward (link):

With all the hoopla surrounding last year’s commemoration of the 75th anniversary of Yeshiva College, the most interesting retrospective came about through the efforts of two recent graduates of Yeshiva University, the central institution of Modern Orthodoxy. Menachem Butler and Zev Nagel pulled together a tour de force of 64 short essays (originally published in the student newspaper The Commentator) in which former students, teachers and administrators share their reminiscences. The result is a highly idiosyncratic, often moving, frequently provocative collection illuminating an institution that has been both hyped and hissed over the years.

“My Yeshiva College: 75 Years of Memories,” with its many adulatory tributes, at first blush appears to be a hagiography of Y.U. Readers, however, ought not be gulled. Probe not too deeply, and you will find a rich cholent of penetrating and incisive observations. The adulatory is interspersed with the acrimonious, and the editors cleverly oblige the reader to work a bit to pull out the succulent pieces of meat from a somewhat schmaltzy stew...

Two Economists: The Rabbi and the Nobel Laureate
In the latest issue of Yeshiva College's newspaper, The Commentator:

R. Aaron Levine, chairman of the Economics Department at Yeshiva University and author of Moral Issues of the Marketplace in Jewish Law, writes about his experiences with Milton Friedman: link
- posted by Gil Student @ 7:23 AM