The Mitzvah in Buying Books
The Rambam (Mishneh Torah, Hilkhos Tefillin 7:1) writes that it is a biblical mitzvah for every Jewish man to write a Torah scroll. The Rosh (Halakhos Ketanos, beginning of Hilkhos Sefer Torah) famously ruled that the mitzvah of writing a Torah scroll only applied to earlier generations when people would write a scroll and then study from it. Nowadays, when people study from books, the mitzvah is write or acquire books of Torah, Talmud, commentaries, etc. and study from them. R. Yosef Karo, in his Beis Yosef (Yoreh De'ah 270), writes that the Rosh was only stating that nowadays the mitzvah is also with books but does not claim that one cannot fulfill this obligation by writing a Torah scroll. R. Yehoshua Falk, in his Perishah commentary to the Tur, disagrees and argues that the Rosh was of the opinion that in today's world the mitzvah is fulfilled only through books and not through a Torah scroll. However, most subsequent commentators disagree with the Perishah on this (see the Pischei Teshuvah, Yoreh De'ah 270:10).

What emerges from this Rosh is that one who buys books that contain Torah and studies from them has fulfilled the biblical obligation to write a Torah.

However, there is another mitzvah aspect to buying books. The Mishnah in Avos (1:4) records: "Yosi ben Yoezer of Tzeredah said: Let your house be a meetinghouse for the sages and sit amid the dust of their feet and drink in their words with thirst." How does one make one's home into a meetinghouse for the sages? R. Tzvi Pesah Frank used to have famous gatherings of leading Torah scholars in his house, the discussions of which led to his series of books Mikra'ei Kodesh. However, that is not an option for the vast majority of Jews. Are we supposed to ignore this Mishnah? R. Hayim of Volozhin, in his Ru'ah Hayim commentary states that this can be fulfilled by filling one's home with books written by scholars: "Through the books that are in our houses, it becomes a meetinghouse for those scholars."

Thus, one enhances one's home and turns it into a meetingplace for scholars by purchasing quality books of Torah literature.

Are All Rabbis Created Equal?
Are all rabbis created equal? No. Some rabbis are more expert than others. The acquisition of rabbinical certification does not imply mastery on all matter of Torah. Some scholars have attained higher levels of expertise and there are leading scholars who simply know more than almost all others. This is as it is in all fields of knowledge.

R. Chaim Jachter quotes a number of sources on this in his Gray Matter volume II, p. 192:

[T]he beit din must not allow rabbis of ordinary stature to rule on matters of great complexity or import (see Teshuvot Meishiv Davar 4:50). For example, the Noda Biy'hudah (vol. 2, Y.D. 88) criticizes an ordinary rabbi for ruling on a case of ro'eh machmat tashmish, a complex area of the laws of family purity that can potentially result in forcing a couple to divorce (see Shulchan Aruch, Yoreh Deah 187). Rav Moshe Feinstein (Teshuvot Igrot Moshe, Even Ha'ezer 1:64) similarly writes that ordinary rabbis should not rule on matters of contraception.[13]

The Hazon Ish on Attending YU
Dr. Alvin Schiff writes the following about his decision to attend Yeshiva College in My Yeshiva College: 75 Years of Memories, pp. 268-269:

I also received support regarding my decision to attend YC from an unexpected source. My mother was a first cousin of R. Avraham Karelitz — the Hazon Ish — the Talmudic luminary of the first half of the twentieth century and my parents’ shadkhan. During the last fifteen years of his life, the Hazon Ish lived in the modest home of my uncle, R. Gershon Schreibman, who would come each summer to the United States “tzu kempfen par shabbos” — to do battle for Sabbath observance. When I completed my sophomore year in high school, my uncle suggested that it would be a good idea to seek guidance from the Hazon Ish regarding the choice of a yeshiva in New York to attend after the completion of high school. My father, known as the Brezer Illui in Lithuania, skeptically agreed. There were four possibilities for me: Mesivta Torah Vodaath, Yeshivat Chaim Berlin, Mesivta Tifereth Jerusalem, where R. Shmuel Greineman, cousin of both the Hazon Ish and my mother, was the menahel, and RIETS.

The following summer, my uncle returned with a Yiddish note penned on a brown paper bag. Translated, the message said: “Avremeleh [my Yiddish name], I think that it is a good idea for you to study in Revel’s yeshiva. There you can excel in learning if you so desire. Moreover, you could study for a trade or profession in the secular department. But, remember, in the cold weather you should wear a warm coat.” This latter reference refers to the environment in which I would be exposed to secular studies. In order not to be unduly influenced, I would need Judaic reinforcement.

R. Chaim Jachter, in his recent book Gray Matter volume II, gives an inside look to some of the issues confronting the institution of beis din in modern times. R. Jachter, an experienced dayan, addresses important issues such as the issuance of a summons to a beis din as done today, how and when one may refuse a summons, the selection and possible rejection of a beis din, the use of lawyers, and other relevant topics. The issue of lawyers is particularly interesting because a prominent newspaper has recently asserted that the Beth Din of America, which is affiliated with the Rabbinical Council of America, does not allow the use of lawyers. R. Jachter's study of this issue contradicts this assertion and explains the halakhic reasoning behind the Beth Din of America's policy.

As the publisher and therefore someone with an admitted (and proud) financial interest in this book, I suggest that this book is a must-read for anyone who wants to understand a litigant's rights and obligations in a beis din.

"This is a well-researched and highly scholarly book that is eminently readable. Anyone who has dealt with serious illness or has lost a loved one will be moved by the issues, and by its sensitive tone."
- posted by Gil Student @ 10:10 AM
Sunday, March 12, 2006 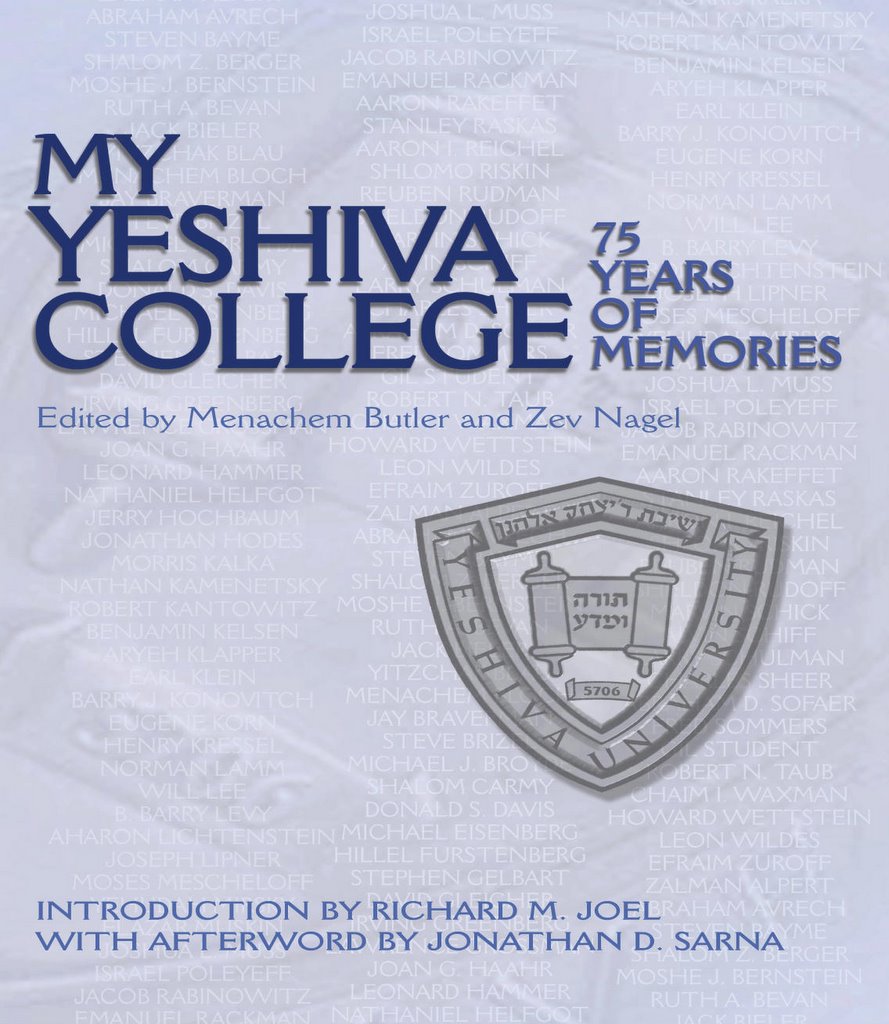 My Yeshiva College: 75 Years of Memories is now available for purchase in hardcover online at the Yashar Books website.

More information about the book here.

Here are some pictures of the event, courtesy of Michael Laves:

This is Rabbi Feldman speaking to an attentive crowd: 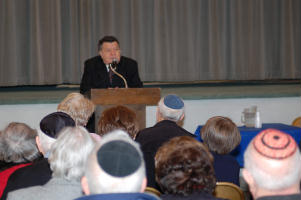 And this is Rabbi Feldman signing books, with me in the foreground: 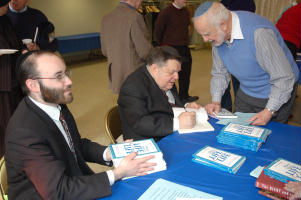 Note at the bottom of this picture a copy of the book by Rabbi Feldman's son, Rabbi Daniel Z. Feldman, The Right and the Good.
- posted by Gil Student @ 10:12 PM